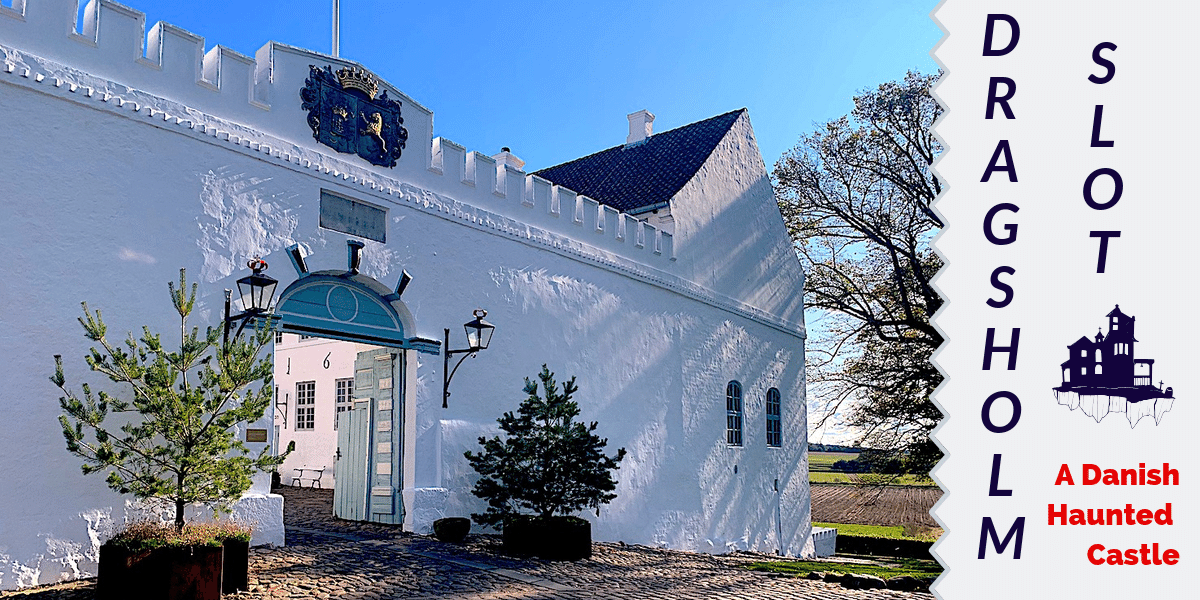 Recently, we heard of a haunted castle on the Northwest tip of Zealand, the island on which Copenhagen is located. It’s called Dragsholm Slot and it seemed like the perfect place to explore for the first weekend in October. Here’s what we discovered on this day trip from Copenhagen to Dragsholm Castle, a haunted gem on the Danish coast.

Where is Dragsholm Slot?

Dragsholm is located about 2 km from Denmark’s Nekselø Bay on Zeland, the island Copenhagen is on. The waterfront is visible from the castle grounds and it’s a very pretty view. The area surrounding the castle consists of reclaimed agricultural land. Prior to the damming of Lammefjord, the castle laid on a tiny penninsula. The thin landmass was frequently used as a land crossing for ships that wished to avoid the dangerous seas north of Zealand. The name is a literal translation of this. You can derive Dragsholm as “drag” meaning to drag boats overland and the name “holm” translates to islet.

How to Get to Dragsholm Slot

Dragsholm is about 75 km from Copenhagen and it’s most easily reached by car. The journey takes about an hour and is a pleasant drive. You’ll drive past Roskilde, the Viking Capital of Denmark and beautiful landscape the entire way.

You can also reach Drasholm by train in just under 2 hours. This includes a 1.7 km walk at the end of the train ride, but a 20 minute walk may be nice after sitting for a while on the train.

The History of Dragsholm Slot

Dragsholm Slot was built by the bishop of Roskilde around 1215. Originally, it resembled a palace more than a fort. It was fortified in the Middle Ages and they must have done a good job. During a war known as The Count’s Feud in the 1530’s, it was the only castle on Zealand to remain standing.

After the Reformation, the land and castles of the church were delivered to the hands of the Danish Crown. At this point, the fortified castle was converted to a royal prison for nobility and religious heads.

During one of the many wars between Denmark and Sweden, the castle was badly damaged. Basically, the Swedes tried to blow it up and they did a pretty decent job. After the war subsided, the King was in massive debt. In 1694, he sold off the castle to a nobleman who rebuilt the castle in the Baroque style of the era.

The family line of that nobleman died out in 1932, a pretty good run, and the castle was turned over to the Central Land Board. At that point, they sold the estate to a private owner named J.F. Bøttger.

Today, the Bøttger family still owns, upkeeps and manages the historic property. Drasholm Slot is now a luxury hotel, tourist attractions and a Michelin Star restaurant. There have been some minor restorations of the castle, but they have retained the Baroque architecture.

From Castle to Hotel

The castle that has survived such a long history, is a marvel in person. While the castle retains its old-world charm, if you stay there you will enjoy a gorgeous modern hotel room. The porter’s house, on the opposite side of the castle’s moat, has also been converted to hotel rooms. Whether in the main castle or the porter’s house, you can spend a night in a history that seems to live on and haunt Dragsholm Slot to this day.

The castle is surrounded by a picturesque moat and well-manicured gardens. The garden also hosts a quaint terrace with sprawling views of the nature around Dragsholm Slot. It’s a lovely place to spend the day wandering and enjoying the grounds. They even host weddings and special events on the grounds. 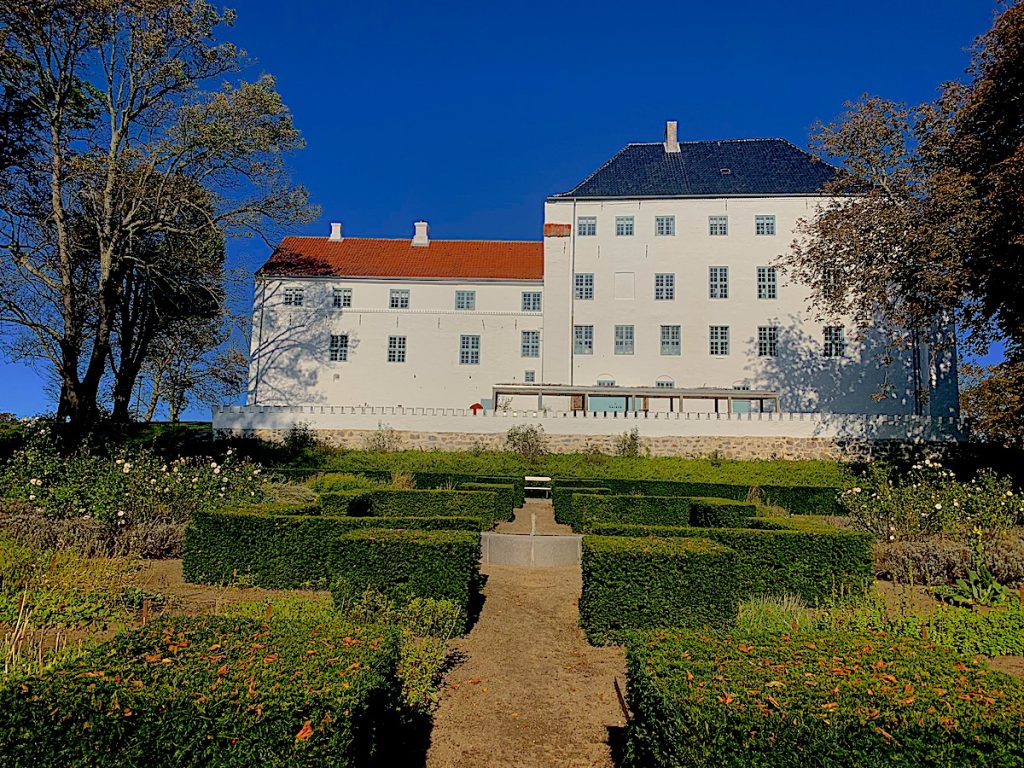 The food scene in Copenhagen is fantastic, and you should explore it while in town, but if you’re in Dragsholm Slot, you should take advantage of their gourmet restaurant. It’s called “Slotskøkkenet” or The Castle Kitchen and the cuisine is exquisite. Who wouldn’t want to enjoy a Michelin Star meal in a 13th-century castle?

The Ghosts of Dragsholm Slot

With quite an active history, you might image that some figures have lingered in the castle beyond their death. There are rumored to be hundred of ghosts haunting Drasholm Slot. Psychics and mediums have visited Dragsholm Castle and repeatedly identify four active spirits. Some of them can be traced to the history of the castle and others to tales that have been passed down over the centuries. In no particular order, here are the most famous ghostly hosts you may encounter while visiting Dragsholm Castle.

As mentioned, the castle was seized by the Danish King during its history. This was when the King rose to challenge the Church and feuded with its leadership. In the case of Denmark, one of those leaders was the powerful Bishop of Roskilde.

Obviously, the bishop had to be dealt with, so he was imprisoned in Dragsholm. Ecclesiastical prisoners were relegated to cells in the tower located in the castle’s center. Today, those cells have been converted into modern hotel rooms with much better amenities. Guests who have stayed in this area of the hotel have reported moaning and wailing coming from the hallways on the second floor. They are always in the area of the tower cells.

The Unearthly Earl of Bothwell

The Earl of Bothwell is a very well-to-do ghost that haunts Dragsholm Slot. He was born James Hepburn and was the third husband of Mary, Queen of Scots. Their marriage is still a controversy today because it was possibly forced. This also occured during the time of the Reformation, notably war between Catholics and Protestants across Europe.

During conflicts over the crown in Scotland, The Earl escaped to Norway, then a Danish territory. He was captured there and imprisoned. The imprisonment was due to a complaint by his ex-wife, a Norwegian noblewoman, who wanted him held and her family’s dowry returned. Some 16th century drama, huh?

When the Danish King learned that The Earl was in Norway and that he was wanted for murder by the English, he had him brought to Copenhagen. There the Danish king deliberated his fate and decided to have him imprisoned at Dragsholm. The decision was easy because word had gotten to the King that The Earl of Bothwell’s marriage to Mary had been dissolved.

The White Lady of Dragsholm Slot

The story of the White Lady of Dragsholm Slot is a sad one. It’s said that her earthly names was Celina Bovles, the daughter of a nobleman. She was betrothed to a man from another noble family and her father was anticipating the prestige that the marriage would bring.

As love goes, Celina fell for a commoner who worked at Dragsholm Castle. When her father discovered the relationship, the two decided on a compromise. She was allowed to carry on the relationship until the day of her wedding.

That plan did not go well, and Celina became pregant before her wedding. Furious, her father had her imprisoned at Dragsholm Castle. She was chained to a wall in the basement and her captors eventually built a wall around her and left her to die. Brutal!

This story appears to have been corroborated in the 1930s. When work was being done to modernized the plumbing of the castle, a skeleton was discovered behind a wall in the basement. Today, there are reports of the ghost of a lady in white walking the castle and crying for her lover. Occasionally she even wails in agony because she has not found him.

The Gray Lady of Dragsholm Slot

The Gray Lady is a happier sort of story. It’s said she was a beautiful woman who worked at the castle. She developed a toothache one day and complained to the master of the castle. The castle master produced a poultice to ease her pain and for a time, she seemed cured. While the soreness and inflammation was relieved, the tooth became infected and the lady died.

While she is gone, her spirit remains and walks the castle in an effort to thank the castle master for relieving her pain. The story is that she commits good deeds for those who work and stay in the castle. Not much else is known about the woman who witnesses claim haunts the halls looking to do good deeds, but she’s a happy ghost.

Spend a Night in a Haunted Castle

If you’re interested in history, fine dining and ghost hunting – you’ll love staying at Dragsholm Slot and agree that it’s one of the best castles in Denmark. Look into sleeping over while you visit the castle on your day trip from Copenhagen. You can make a night of it for under $200 USD and you might not be alone while you visit.

Click here for information on booking this truly unique experience while in Copenhagen.

Would you spend the night in a Haunted Castle or just drop by for dinner and a photo? Let us know below!

How to Plan a Copenhagen to Malmo Day Trip