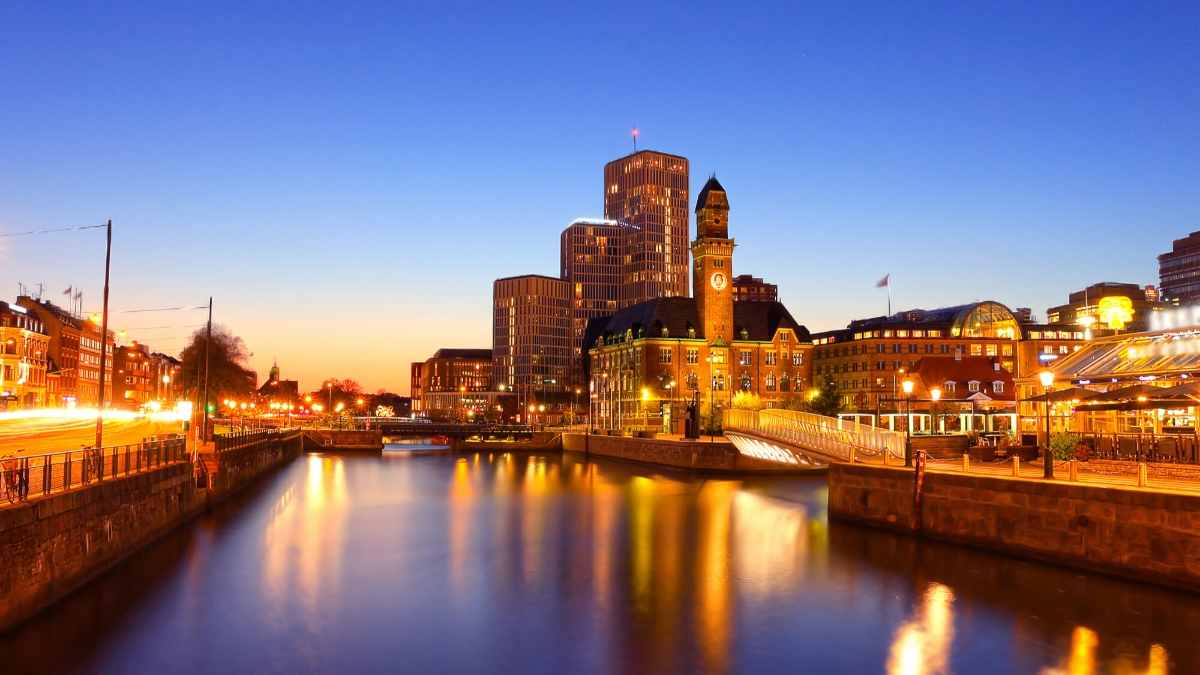 While you can spend days exploring everything the Copenhagen has to offer, we recommend looking into day trips out of the city to experience other parts of the region. With a trip to Malmö you not only get to experience a different city, but you also get a different country!

Malmö is on the opposite site of the Øresund Bridge, which separates Sweden and Denmark. Malmö may not be internationally famous, but it is the third largest city in Sweden, and is known as a multicultural melting pot with lots to offer.

How do you get from Copenhagen to Malmo?

Trains run from Copenhagen to Malmö every 20 minutes via the Øresund line, which passes through Copenhagen Central Station, Nørreport Station, Østerport Station, and other stops along the Danish coast to Helsingør.  Tickets are 91 DKK each way (about 13 USD), and the train takes about 45 minutes from Central Station. Be sure to pack your passport, as Swedish and Danish border patrol will check them (but not stamp or scan them).

Is Malmo worth visiting?

Malmö is a great compliment to Copenhagen, similar to visiting Oakland or Brooklyn while visiting San Francisco or New York. Malmö’s economy historically was tied to heavy industry that has declined significantly since the 1970’s. But recent years have seen an economic uptick, as a strong start-up and innovation scene has filled the industrial void, an influx of immigrants and younger Swedes seeking a lower cost of living has rebounded the population, and strong ties to nearby Copenhagen have expanded economic development and tourism.

For a Copenhagen to Malmo day trip, you will experience the contrasts that Malmö offers. There are modern views in a medieval city centre, Danish castles on Swedish land, and global tastes along side traditional cuisine.

Here’s a full day itinerary for your Copenhagen to Malmo day trip. It doesn’t have to be followed to the letter, some things may be cut out for time or because of weather and seasonal factors. Just like any itinerary on our site, you may want to substitute activities or linger at some longer and bump others out. However you plan your day trip, this is a good start to show you the highlights of Malmo.

A Stromma Canal Tour is the best way to start your visit and become oriented with Malmö. The tours depart just a couple blocks from Malmö Centralstation, and signs make it easy to find the dock. Tours run April-September, last 50 minutes and typically run hourly in spring/fall or every 30 minutes in summer.

Central Malmö is surrounded by a canal, so the tour will allow you to see the entire historic core while comfortably sitting and listening to a live narrator. The tour starts by traveling out into Malmö harbor, offering views of Turning Torso, the tallest building in Scandinavia). Then the tour continues around the canal, passing by Malmöhus Castle, Kungsparken park, and other Malmö landmarks.

Have a Picnic Lunch

After the canal tour, walk over to nearby Malmö Saluhall, a covered market offering a number of food vendors and restaurant stands. You can find delicious ice cream, meat and cheese for an afternoon picnic, or have a full lunch of falafel, pasta, noodles, and any of the other influences from Malmö’s vibrant immigrant communities. We recommend stopping by the amazing bakery St. Jakobs Stenugnsbageri, where you can sample their tasty pastries and fresh bread.

From Saluhall, it is about a 300 meter walk to one of Malmo’s outdoor gems, Kungsparken. This park surrounds Malmöhus Castle (your next stop), and offers great walking trails among the trees, canal or castle moat. There is no better place to picnic in Malmö!

Visit the Museums and Malmö Castle

The indoor highlight in Malmö is the wonderful museum complex housed in Malmöhus Castle. This is the oldest Renaissance castle in Scandinavia, and was actually built by the Danes starting in the mid-fifteenth century. The southern Swedish region known as Skåne was Danish territory until 1658, and castles like this defended the northern border and solidified Danish control over Malmö.

After the Danes left, the Swedish army modernized the castle, but over time it lost military significance, falling into disrepair and being used primarily as a prison. In the 1930’s the castle was restored to its Renaissance glory and began to be used as a museum.

Today, several excellent museums fill its halls, including ones for art, natural history, and an aquarium. On a rainy day you may choose to spend more time in here, but even on a sunny day we recommend a few hours to explore its offerings.

After stimulating your brain at one of the museums, you are going to need a cup of coffee. Swedes take this experience seriously – you can’t just walk into a Starbucks and order take-away! You need to experience fika, which is a Swedish term for a proper coffee break. And a proper coffee break means finding a nice coffee shop, ordering a well-prepared coffee and a pastry or cake to nibble on, sitting down, and enjoying a moment away from the world (either alone or with friends).

We recommend stopping by Lilla Kafferosteriet, a quirky shop in a 17th century home in the middle of central Malmö. They offer delectable sweets or nice lunch options if you want something bigger to eat.

Did you really visit Malmö if it didn’t appear on Instagram? Earn the envy of your followers by taking some pictures with Stortorget as your backdrop. This is the historic central market square for Malmö, dating back to the 17th century. The center offers Swedish flags and a equestrian statue of King Karl X Gustav, who defeated the Danes and united Skåne and Malmö with Sweden. Surrounding the square are a number of Renaissance-era buildings, including the historic town hall.

Relax with a Beer

Around the corner from Stortoget you can find Lilla Torg, a small but well preserved old town square offering half-timber buildings and great people watching. Moosehead is one of the restaurants surrounding the square, offering outdoor seating and a decent beer list. You can also eat here, but given the location and ambiance prices are somewhat high for the average quality of food. This is definitely worth a stop for a drink to relax, but doesn’t need to be your dinner spot.

Dine in a Local Hot Spot

The name may not sound desirable, but a table at Bastard definitely is! Located around the corner from Stortorget, Bastard is a trendy restaurant that has been around for a decade but remains fresh and full of locals. The cuisine is broadly modern European, with a focus on fun meat dishes and small plates, and an atmosphere that can best be described as “hipster open kitchen”. Bastard routinely show up in various “best-of” guides, and it is well earned. This is a good way to end your visit to Malmö, with a delicious meal before an evening stroll to the train station.

Spending one day in Malmö will give you an opportunity to experience not only another city, but also another country and culture. There are other opportunities in Malmö to explore. For one, you can go to Ribersborgs Kallbadhus, a spa along the Øresund Strait that is open year-round and offers an opportunity to relax in a spa or sauna. If you want to expore deeper into “local” Malmö, check out Folkets Park, which is about a 25 minute walk from central Malmö, and offers markets, playgrounds, markets and people watching. And if want a great view of both the Turning Torso and Denmark from across the Strait, wander up to Västra Hamnen, which is a park on the northern edge of Malmö that includes walking paths and a skate park.