City Hall Tours in English are conducted Monday – Friday at 1 pm and Saturdays at 10 am. The price is 60 DKK or about 9 USD.

City Hall Tower Tours in English are conducted Monday – Friday at 11 am and 2 pm and at 12 pm on Saturdays. The price is 40 DKK or about 6 USD.

As you’re considering the best option, check out more information on the Copenhagen Card. It’s a money-saving way to see Copenhagen easily and efficiently.

Any family visiting Copenhagen should buy the Copenhagen Card for their visit.

Find out more information on the Copenhagen Card and current pricing for 24, 48, 72, and 120 hour Cards.

Here is how we recommend visiting Copenhagen City Hall. We’ve taken a number of trips to City Hall with visitors and it’s always enjoyable. The building is beautiful and the views of Copenhagen are astounding – possibly the best in the city. It doesn’t sound very glamorous, but it’s a cool morning or early afternoon activity and here’s how we recommend doing it.

Copenhagen is over 850 years old but the current City Hall building was only opened in 1905. They’ve had several others over the centuries. A few have been lost to fires, but the most recent prior City Hall building still stands in a nearby square. Begin your morning at Nytorv – where you’ll find Old City Hall. It opened in 1815 and served as Copenhagen City Hall and Courthouse. Today it still operates as the latter and is situated in a very pretty square where you can enjoy a cup of coffee and some people-watching before walking to the current City Hall. Notice the inscription on the building which read “Med lov skal man land bygge”. This means With law shall land be built. It’s a line from the oldest written Danish law manuscript, the Codex Holmiensis.

While sipping your coffee you’ll notice a lot of pedestrians crossing the bordering street, Strøget. It’s the longest pedestrian street in Europe and you may have even walked down it to arrive. It’s full of shopping, churches and food stalls running from one end of the city to the other.

If you look beyond Strøget you’ll see a gorgeous fountain. It’s the Caritas Well (or fountain) and was built in 1608 and commissioned by King Christian IV. It’s the oldest fountain in Copenhagen and known for having “jumping apples” that were designed to be celebrating the Queen’s birthday.

Walk to City Hall from Nytorv

From Nytorv you’ll have a quick route to Copenhagen City Hall. If you face city hall, walk through the arched pathway to its left. As you may notice from the iron-barred windows, this used to be the jailhouse. It was conveniently placed directly adjacent to the courthouse and connected by a walkway above you.

As you follow the pathway you’ll see a street ahead of you leading to City Hall. You’ll also have a great view of City Hall Tower ahead of you. It’s also a great point to stop for a picture. You may spot a corner pub on your right called Central Hjørnet. It’s the world’s oldest (still operating) gay bar. It opened in 1917 and the Danish navy once forbid sailors from visiting the watering hole. They decorate the interior to a serious degree for every season. It’s a nice, straight-friendly, and historic gay bar to stop for a drink daily after 12 pm.

When you make it to the end of the street you’ll see a large plaza to the right, which is where you’ll find the entrance to Copenhagen City Hall. That plaza is the former Hay Market of Copenhagen and it’s just as full of action in modern times. On that square you may see a political protest, a music festival, or even a drag show depending on the time of year you visit.

The busy street on the opposite side of City Hall (between you and Tivoli Gardens) was at one time the western wall of Copenhagen City. Those fortified walls were disbanded in the 1850s and the city quickly expanded beyond the walls.

There are 300 steps between where you’re standing to the top of City Hall Tower. It rises 105 meters (345 feet) above the city. Walk into the ornate doors after taking a few minutes admiring the facade. In the lobby you’ll see signs displaying the hours and prices for tours (spoiler – they’re the ones posted above). On the left you can buy tickets or show your Copenhagen Card to get tour tickets included with your card. Tour guides will meet you in the lobby and begin your City Hall experience.

The Tour of Copenhagen City Hall

Both tours are fantastic and full of great information and wonderful views inside and outside of the building. Take note of the ornate wood carvings, mosaic-tiled walls and painted ceilings throughout the building. The central courtyard is a highlight of City Hall with its fountain and gardens. The Great Hall is also a gorgeous feature of the building. You may even see couples posing for wedding photos or officially tying the knot in this room. 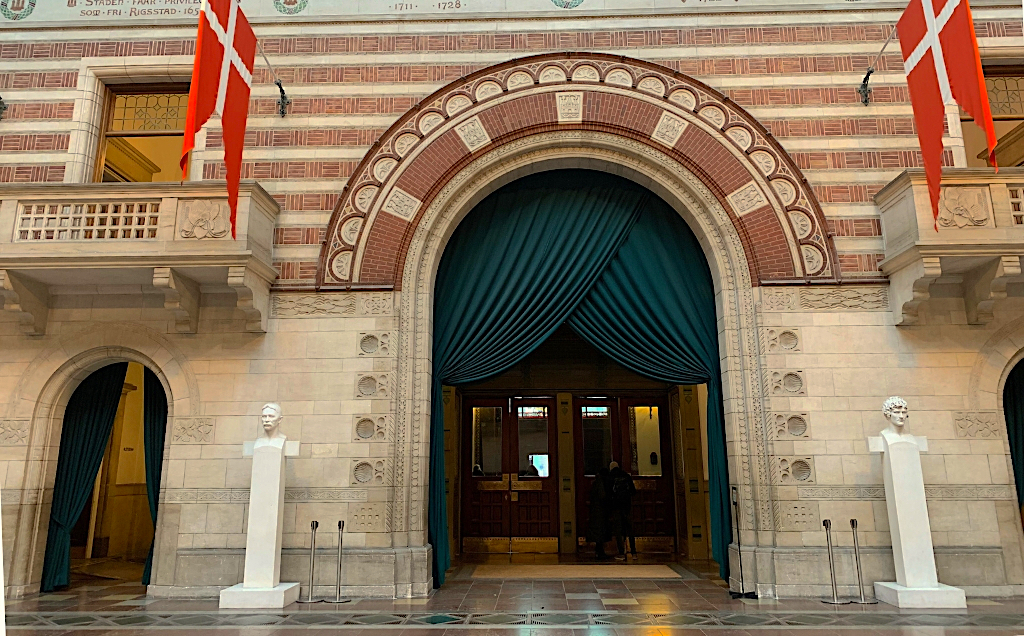 We recommend doing both tours! The walk to City Hall Tower’s viewing platform is the main reason why. You’ll get to see some cool artifacts of Copenhagen history before you begin the walk to the top of the tower. The walk is relatively easy because each floor has a landing area that displays more information and exhibits where you can rest and learn as you ascend to the top.

Once to the viewing platform, you’ll have 360° views of the city. You can see Tivoli Gardens, Christianborg Slot (parliament) and every angle of Copenhagen. Each side of the building has signs to point out landmarks and help you get the most out of each view. Take pictures, add to your instastory and bask in the beautiful views above the city. Don’t forget to tag us and use #EverythingCopenhagen.

Copenhagen Spring: A Guide for the Season

Things to do in Copenhagen in Winter